Most people are not surprised to learn that the kids and I are in counseling since their mother, my wife Uzma, died almost a year and a half ago. Some people are, however, surprised that a psychiatrist would need counseling.

Will we need counseling? I wrestled with this question for a few months before Uzma died. When Uzma’s cancer came back as stage 4, both of us knew we were unlikely to grow old together. The diagnosis of stage 4 cancer instantaneously brings the end of life in one’s field of vision. If it happens after a period of remission, one stops being a survivor and becomes an impending mortality statistic. Each passing day, each failed treatment moves death from the periphery to a more central position in one’s mind. It casts an ominous shadow on every part of one’s life.

Many of those who love a person with stage 4 cancer start experiencing elements of grief long before that person breathes her last. Beginning to mourn for a near-certain loss before the loss happens is called anticipatory grief. I am not sure that we should continue calling such sorrow “anticipatory.” Often a death from cancer — and some other debilitating chronic illnesses — is preceded by a parade of losses, some of which I wrote about in Cost Of Cancer:

…Travel to and from the clinic where the patient receives treatment adds to the burden of illness. There are lost wages – for the patient, and also for any family member(s) or friends(s) who accompany her to various treatments. Families often have to struggle to find time to plan and cook meals. They end up eating more frozen or restaurant meals, which are less healthy and more expensive than home-cooked meals. Since Stage 4 patients will be in treatment for the rest of their lives, there’s no end to all this.

Stage 4 cancer didn’t just spread through Uzma’s liver. It spread throughout her life, our life. We have supportive friends and family, but it was as if cancer threw a noose around our life and slowly but steadily kept tightening it. Our social and professional life constricted during treatment…

The longer a person lives with stage 4 cancer, the more those short-of-death losses keep piling on. I have come to believe that to some degree, what we call “anticipatory” grief, in reality, is the mourning for losses that have already begun — injuries that are warning of an even more devastating loss.

What will I learn from a counselor or therapist that I don’t already know? I asked myself this question when thinking of counseling. Indeed, I have helped bereaved individuals in my work. I probably know at least as much about overcoming loss and grief as most mental health professionals. Nevertheless, in the circumstances like these, it’s not the knowledge that is faulty, but its application. The heart makes it difficult for the head to remain objective when one has to treat oneself, or one’s loved ones. As Sir William Osler, one of the wisest physicians who ever lived said:

A physician who treats himself has a fool for a patient.

Our kids and I were about to experience two significant losses — my wife and their mother. Though some psychologists rate the death of a spouse as the most stressful event a person can experience, I find it difficult to imagine any loss harder a child losing a parent. It has the potential to permanently derail the road to the development of a stable sense of self, which is essential for both happiness and success in life.

Listen to Stephen Colbert and Anderson Cooper talk about the effect of losing their fathers at ten years old. (If you play and don’t skip ahead the video will automatically stop playing at 4:07). They describe the impact of the loss of a parent in ways similar to how I have heard patients describe it:

And you’ve spoken very publicly about what you experienced as a kid. And I just, a lot of it I didn’t know. I think a lot of people don’t know. So if you don’t mind, I wanted to talk to you a little about it and sort of how it has shaped who you are now?

Your dad was killed in a plane crash. You were 10 years old along with your two brothers, Peter and Paul. And they were the closest brothers to you in age.

Anderson Cooper: 11 are there?

Cooper: All right. My dad died when I was 10, too. It is such a horrible age to lose a father. I can’t imagine losing both my brothers at the same time as well. For me, losing my dad then, it changed the trajectory in my life.

I’m a different person than I feel like I was meant to be. And I feel like there are times I, yes, I’m, I feel like I remember when I was 10, I felt like I marked time. To this day I mark time between while my dad was alive and after. It is like the New Year zero. It’s like when Pol Pot took over Cambodia [empahsis mine].

Colbert: Without a doubt. Without a doubt. Yes. There’s another guy. There is another Steve. There is a Steve Colbert there is that kid before my father and brothers died. And it is kind of difficult. I have fairly vivid memories from right after they died to the present. It’s continuous and contiguous you know like it is all connected. There is a big break in the cable of my memory at their death. Everything before that has an odd ghostly–

Colbert: Little bits of it and then the thing that, really like music because they died in September. They died on September 11th, 1974. The music from that summer leading up to it I will undo me in an instant.

The song of the summer was band on the run. Do not play band on the run around me. Yes. You become a different person like I was just personally shattered. And then you kind of re-form yourself in this quiet, grieving world that was created in the house.

And my mother had me to take care of, which I think was sort of a gift for her, it was a sense of purpose at that point because I was the last child. But I also had her to take care of. It became a very quiet house and very dark.

And ordinary concerns of childhood suddenly disappeared. I won’t say mature because that actually was kind of delayed by the death of my father, by restarting at 10. But I had a different point of view than the children around me [emphasis mine].

Cooper: There was a writer, Mary Gordon, who wrote about fatherless girls and I think it applies and my mom used to quote it to me all the time but I think it applies to boys as well as paraphrase. A fatherless child thinks all things possible and nothing is safe. And I never really understood when my mom would say when I was alone, young but I’ve come to understand it.

All skilled mental health professionals regularly practice managing the impact of their own emotions on their treatment relationships. That, however, does not make us superhuman. In our roles as husbands, parents, children, siblings, and friends, we remain just as capable of acting on our petty and sublime feelings as our patients. Grief can emotionally paralyze grown men and women, let alone children. Growing up motherless is not easy for kids, but what would their fate be if their father were to succumb to grief? No child can survive the emotional impact of losing their mother to cancer and their father, even if not literally, at the same time.

It was a high-probability, high-risk scenario.

That’s why I decided that we would all go to grief counseling. And that is why I only waited a couple of weeks after Uzma’s death before setting up our first appointment. 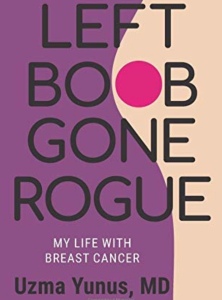