Some years ago, I saw an advertisement for “NoCry” cut-resistant gloves. The picture in the ad showed two hands wearing the gloves and a large kitchen knife being pulled across one palm (see bottom of page). At that time, I thought, “No one pulls a kitchen knife across one’s palm like that!” I wondered who would genuinely need these gloves. They will never pay for themselves except for people who accidentally cut themselves all the time. Then, two years ago, I bought them.

Over the course of her multiple chemotherapy regimens, especially since her cancer returned in 2016, Uzma developed nerve damage known as chemotherapy-induced peripheral neuropathy (CIPN). CIPN is a common side-effect of many cancer medications. One scientific study found that almost 70% of cancer patients have CIPN one month after chemotherapy ends. For many, the symptoms subside with time since treatment, but the same study found that almost one-third of cancer patients still have CIPN six months out of treatment.

There isn’t one particular explanation for CIPN. Science tells us that there many roads to this kind of nerve-damage with cancer treatment. Some mechanisms are more relevant to some drugs, while others play a role in CIPN caused by other medications. We know that smoking, pre-existing neuropathy (from diseases such as diabetes), and impaired kidney function increase the risk of CIPN. In most cases, large nerve fibers suffer damage, leading to a “glove and stocking” pattern of symptoms. That is, the symptoms are most significant in the areas of the body that gloves and stockings would cover.

These symptoms commonly include varying degrees of burning pain, numbness, tingling, itching, and other unusual sensations. They may also include weakness, and when involving the feet, problems with balance. Changes in heart rate, diarrhea, or bowel movement patterns can occur in case of damage to nerves for automatic functions.

By the final several months of Uzma’s life, she had constant burning pain, tingling, and numbness in the glove and stocking pattern. By mid-2018, the problems with dulled sensation had become strong enough that she stopped driving.  She felt she couldn’t be sure about applying the right amount of pressure on the gas or brake pedals. By then, problems with weakness and balance also became significant enough that she had a couple of falls on the street. From that point on, she needed assistance when walking, especially outside the home. Eventually, in the house too.

By the time Uzma left us, we were renting a stairlift and owned all sorts of equipment including, suction bathroom handrails, a shower stool, a toilet seat riser, toilet seat handrails, a cane, a rollator, and a wheelchair. The goal was to help her maintain as much independence as possible.

The first tool we purchased, way back in 2017, to help with CIPN-related disability was a pair of cut-resistant gloves. You see, long before, burning pain, weakness, and problems with balance, Uzma had started to have numbness in her fingertips. It made her frustrated at needing help with one of the things she loved to do — cook. The numbness caused her to feel afraid to use knives. Though she would ask me for help, she hated that she couldn’t just start food prep whenever she wanted to and had to rely on someone to help. The cut-resistant gloves fixed that problem and gave her confidence back. She could ask for help if she wanted, but she didn’t have to ask for help.

I was reminded of this while reading this piece in the online magazine Vox: 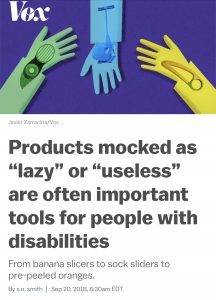 As the article rightly points out the utility of a banana-slicer, “Imagine being unable to slice a banana over your morning cereal because your hands are paralyzed or joint contractures make it hard to grip both the banana and the knife.” It then makes us think about the kinds of impairments that for which ‘useless’ tools such as a sock-slider and yolk separator might be helpful.

I admit that commercials for these products are sometimes too funny. They often show people making exaggerated movements while doing things like separating egg yolks or putting on socks. The exaggerated movements lead to spoiled eggs or falls. Then they present the relevant product as the solution. Maybe those people in the commercials can’t do things the usual way. Perhaps they have a disability that is not evident to the casual observer. I think the ads may have to be that way. While the product may have been developed for a niche group of people, limiting one’s sales to that niche will never get the profits that a broad market will.

It’s easy for us to think walkers and canes help with disabilities because the impairments for which they help are usually evident to us. Let’s pause once in a while and think about the products that help with not-so-obvious difficulties.

And let’s give a thought to cancer patients suffering from nerve-related pain, numbness, and weakness. Let’s ask our loved ones with cancer about it as often they won’t complain about this. They think this is the least of their problems. Even if that were true, neuropathy is a problem with real consequences and risks for them. 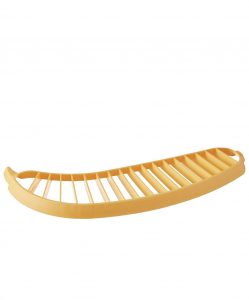 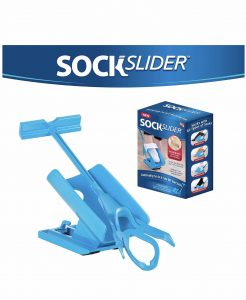